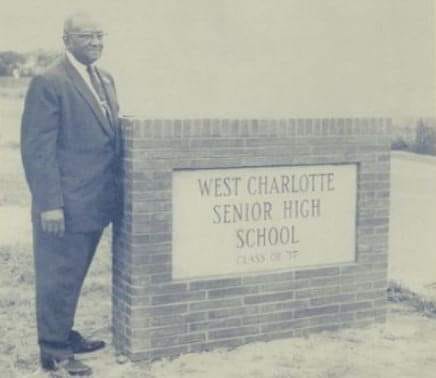 West Charlotte has a unique and rich history that began in the fall of 1938 when the Charlotte City Schools opened the doors to the second high school for “Negroes”. Under the leadership of Clinton L. Blake, its first principal, West Charlotte began its march to academic excellence with 398 students in grades seven through ten. The faculty was made up of fourteen dedicated and very capable teachers.

The original school was at 1415 Beatties Ford Road in a beautiful two-story brick structure that contained seventeen classrooms, administrative offices, a spacious library, and general science, chemistry and physics laboratories. The hallways were lined with full-sized steel lockers.

Over the years that followed, West Charlotte grew quickly as grades were added.  In 1944 West Charlotte became a complete junior-senior high school with students in grades seven through twelve.  The school became the pride of the black community in the Northwest quadrant of the city.  Shortly after its opening, the spirit of West Charlotte was born. The mighty and proud Lion was chosen as the school mascot and maroon and gold were selected as the school colors. Carrie Robinson Quander wrote the words to the Alma Mater. Samuel Moore took the tune of the song from Salvation by Grace, which is the Overture to Wagner’s great opera, Tannhauser.

From its inception, West Charlotte’s primary goal has been to prepare its students to live wholesome and productive lives. Principal Clinton L. Blake made sure that the foundation was established to achieve that goal. He implemented a curriculum that included fundamental concepts of life and work in a democratic society. Students received rigorous training that prepared them for entrance to a four-year college or a vocational or trade school. “To Strive, to Seek, to Find, and not to Yield,” was the guiding philosophy of West Charlotte Junior-Senior High School.

As the population of the West-side grew and as West Charlotte expanded its curriculum, it became necessary to build a new facility. In September of 1954, West Charlotte High School moved to its present site at 2219 Senior Drive, located on the fifty acre Old Keller Farm and the old site on Beatties Ford Road became Northwest Junior High School (now the Northwest School of the Arts). Clinton L. Blake, thirty-one teachers and 800 students herald the opening of the NEW WEST CHARLOTTE SENIOR HIGH SCHOOL. The new school was dedicated during commencement, June 1955.  Clinton L. Blake continued to serve as principal until his retirement in 1966. The Blake years were marked by participation in extracurricular activities, which he as a principal, supported and encouraged.

The court decision in Swann vs. The Charlotte-Mecklenburg School System brought change to West Charlotte. Although the faculty became racially integrated several years earlier, the desegregation process for students did not begin until 1969. At that time, Court-ordered busing became a reality.

In order to keep pace with the various learning philosophies, an Open School component was added in 1974 and the English as a Second Language (ESL) Program was added in 1980.  Many innovative programs have been added to the curriculum at West Charlotte including the Advanced Placement Program that allows students to earn college credits; and, the International Baccalaureate Program, which provides highly motivated students with an opportunity to pursue a rigorous liberal arts curriculum.

In the fall of 1999, the administration and school board members cut the ribbons to open a renovated media center that features a closed-circuit television station, a media wall and a networked computer lab. Additionally, classrooms and offices were added to gymnasium. The exterior of the gym received a major face-lift and the front now boasts a futuristic look that shouts, “Twenty-first century!” A new classroom building was constructed as a part of this major renovation and building project. The tennis courts, track and fields were resurfaced. The expanded athletic facility includes an Olympic-sized swimming pool and a weight training room.

The arts remain an integral part of the curriculum. West Charlotte choirs have performed at such notable sites as Riverside Baptist Church in New York City. The Mirror is still the voice of the students and drama, true to Mr. Blake’s memory, is a vital part of the students’ lives. The high-tech Workforce Development programs have replaced the vocational programs of the early years. West Charlotte is now the site for a state-of-the-art graphics department. The wood technology classes prepare students for entry in the construction trades. Computer labs allow students to learn at their own pace. West Charlotte students and teachers go on-line to communicate worldwide.

Museum of the New South sponsored, “West Charlotte Homecoming”, a program in conjunction with a West Charlotte exhibit – “Carry the Spirit”, voices of desegregation.

Over the years WCHS has been faced with a lot of challenges to its very existence. Clinton L. Blake was the first principal and he retired in 1966 after being at the helm for 28 years.  In the 50 years since his retirement, WC has had 17 principals who have served from 1 to 5 years individually. West Charlotte In 1954 was a “state of the art” school which existed in the first community of track homes for Blacks. The Roar was loud and there was an abundance of Pride. In addition to leadership changes, there have been school boundary changes, school closings, and neighborhood changes as well. It was inevitable that some of these changes would impact every area of education, particularly achievement. Efforts have been made to define the cause of the “achievement gap” which seemed to widen and to come up with a remedy. One such effort came in January 2011 when the CMS Investment Study Group unveiled a $55 million dollar plan to boost graduation rates, narrow achievement gap in the West Charlotte corridor. Project Leadership & Investment for Transformation (L.I.F.T.) was introduced as a sort of pilot to see if some of the remedies and recommendations of the study group would work to close the achievement gap. Project LIFT includes all schools that feed into West Charlotte High School.

In 2017 the citizens of Mecklenburg County approved a bond funding 17 new schools and renovations and additions of 12 others. West Charlotte was included as a “new school” project with a projected scope to include 125 new classrooms and the replacement of the current facility built in 1954. Construction to begin April 2020.

Graduates of West Charlotte attend colleges and universities across the country, and as members of the National Alumni Association, proudly carry the banner “Lion Pride, Nationwide”. It is a school with enviable traditions and loyalties, and a spirit that has served its thousands of graduates as they proudly enter the mainstream of society.

During the summer of 1981 two alumnae, Mae C. Orr and Rudy Torrence of the 1946-47 classes, shared the idea of bringing all organized classes under one umbrella and becoming the “West Charlotte High School National Alumni.”

Since its inception the West Charlotte National Alumni Association has been a visible and viable force in the community.  In 1983, the WCHSNAA appealed to the Board of Education to name the auditorium “The Clinton L. Blake Auditorium”.  The auditorium was dedicated on May 27, 1984 with a portrait of Mr. Clinton. L. Blake done by artist, Mr. John Kennedy, Class of 1949 unveiled and placed on the wall in the lobby of the auditorium. The first of an on-going triennial reunion took place in 1983 in Charlotte with a souvenir Journal dedicated to Mr. Clinton L. Blake. This event has become a homecoming for alumni nationwide. To date there have been thirteen (13) triennial reunions.

The WCHSNAA, Inc. awarded the first Clinton L. Blake Scholarship in 1984, and a plaque exhibiting each recipient’s name in gold is placed on the wall at West Charlotte High School annually. To date 35 Scholarships have been awarded to WC graduating seniors.

Alumni volunteer at West Charlotte serving as greeters on the first day of the school year, monitoring during tests, as Senior Student Exit Essay Project Board members, members of the Booster Club, PTSA, and as mentors.

The West Charlotte Documentary historical documentary, “The Mighty Lions”, was produced by Kathryn Frye and Tim Gibbs, Class of 1978 as associate producer.

West Charlotte High School’s history is Charlotte’s history.  During the early days of the seventies, West Charlotte became a model of peace and unity.  It was the students of West Charlotte who became national symbols of peaceful integration. As the only remaining former all black high school, West Charlotte still stands. The students, staff and alumni remain true to the goal, “TO STRIVE, TO SEEK, TO FIND, AND NOT TO YIELD!”